ACTIVITIES
SHIRAKAWA-GO & GOKAYAMA
From Shirakawa-go: Visit Takayama
BACK TO LIST

Many visitors to Shirakawa-go will make the journey via its nearby neighbour of Takayama. Long known to Japanese as one of the best-preserved Edo Period towns in the country, Takayama has achieved increasing popularity with international visitors following the World Heritage-listing of Shirakawa-go and Gokayama. As international travellers move to and from Shirakawa-go they have discovered the historic town centre of Takayama and its thriving food culture. As such, visiting both Takayama and Shirakawa-go at the same time is an extremely popular double-stop as visitors move through Central Japan and between Kyoto and Tokyo.

During the Edo Period (1603-1868), Takayama was renowned for the skill of its carpenters, timber craftsmanship and other artisans. As such the city was placed under the direct control of the Tokugawa Shogunate, under a policy known as ‘shihaisho’ or ‘tenryo’. Translating to ‘emperor’s land’, Takayama was effectively owned by the shogun who made use of its master craftsmen in constructing temples and official buildings throughout Japan.

Today, that mastery can still be seen in the charming streetscape of Takayama’s old town. Known as the ‘Sannomachi’, the historic centre of the city lays claim to being one of Japan’s best remaining examples of an Edo Period town. Original buildings dating back to the 18th century remain today, a testament to the quality with which they were constructed. Merchant buildings, storehouses, and historic homes operate as restaurants, cafes, museums, and craft stores, with the families that run them often living on the second-floor.

Takayama has also established itself as a great town for foodies and lovers of ‘washoku’ (Japanese cuisine). Located in the next to the Hida region of Gifu Prefecture, called is also called Hida-Takayama and many visitors come to try some of Japan’s best beef. Hida beef or ‘Hida-gyu’ is the name given to a specific type of beef, produced from black-haired Japanese cattle.

Known for its intense marbling, the flavor is rich and sumptuous to eat. Considered the match of internationally acclaimed ‘wagyu’ and Kobe beef, for many Japanese Hida-gyu is the best beef in Japan. Located under an hour from Shirakawa-go and the main transport hub through which most visitors move, there really is no excuse not to spend a day or two in, and around Takayama.

25 THINGS TO DO AROUND TAKAYAMA & WHERE TO STAY

When people talk about the beauty of Takayama and encourage you to visit, they are speaking of the city’s beautiful historic centre – one of Japan’s best remaining examples of an Edo Period (1603-1868) town. Through that time, Takayama was renowned for the skill of its carpenters, timber craftsmanship and other artisans. Today, that mastery can still be seen in the charming streetscape of Takayama’s old town. Known as the Sannomachi, the historic centre of the city is lined with beautiful buildings housing restaurants, craft and food stores, breweries, museums, accommodation and many residential homes. The city is equally well-known for its thriving food scene including its famous Hida beef and Takayama ramen, while outside of the city, visitors can access some of Japan’s most rewarding destinations including the World Heritage-listed villages of Shirakawa-go and Gokayama, the beautiful alpine valley of Kamikochi or more historic destinations such as Matsumoto Castle and post towns of the Nakasendo. For tips and suggestions of what to do while there, including accommodation listings, see our ’25 Things To Do Around Takayama & Where To Stay’ page. 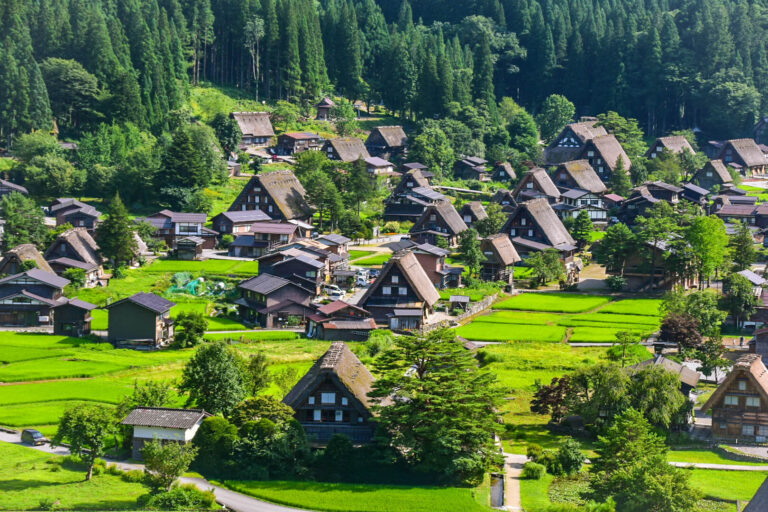