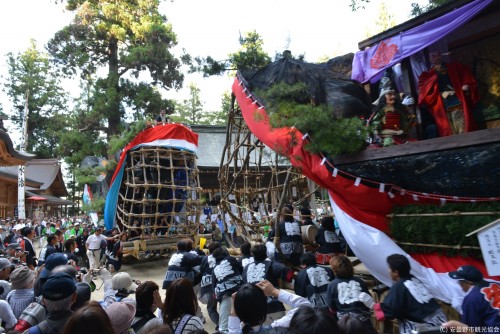 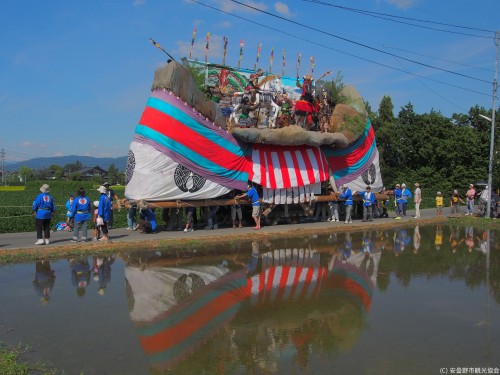 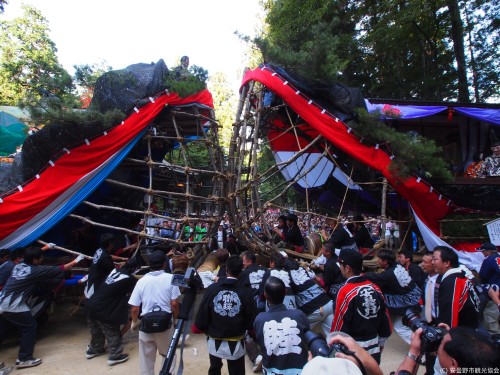 (EN) A unique festival with ship shaped floats held in Nagano, an area entirely separated from the sea.

The rich countryside and views of the Northern Alps have made Azumino in Nagano prefecture a popular destination for tourists visiting Japan. It is also an area of cultural interest. The “Azumi” in “Azumino” is derived from the name of clan of skilled navigators originating in Kyushu. This seafaring Azumi Clan emigrated from western Japan to settle on these plains, 500m above sea level, and at the feet of 3000m peaks.

It is said that this pioneering voyage took place in the 7th Century, but even in this mountainous region, the ship festival still remembers and reproduces the events of an ancient battle at sea.

During the ship festival, local residents pull floats resembling colorfully decorated ships through their neighborhoods. They eventually gather at Hotaka Shrine where the ships are violently clashed together at the festival’s climax. Hotaka Shrine has a deep connection to mountain ascetics. Alongside the main main shrine in Azumino are the associated rear-shrine in the alpine valley of Kamikochi and above it, a summit-shrine atop the peak of Mt. Oku-Hotaka.

Preserving the memory of the Azumino clan from distant Kyushu, who travelled the seas and crossed the mountains to settle and build new lives here, this is a distinctive local festival that can only be seen in this area.

The festival takes place over two days. On the first day (9/26) the floats are decorated in public spaces such as in front of Hotaka Station. On the second day (9/27) each float is pulled around the town before, during the festivals highpoint from around 2pm, they are clashed together in the grounds of Hotaka Shrine.

The shrine is easily accessed, just 5 minutes walk from Hotaka Station, making day trips possible from both Matsumoto and Hotaka. However, the festival can become quite crowded on the second day.