How to Get to the Tateyama-Kurobe Alpine Route

Open to the public from mid-April until mid-November each year, the Tateyama-Kurobe Alpine Route crosses Japan’s highest mountain from Nagano Prefecture to Toyama Prefecture and in doing so, opens-up one of the country’s most remarkable alpine landscapes. On this page you will find the following information:

— Where is the Tateyama-Kurobe Alpine Route?

— How to Get to the Alpine Route

— 25 Things to Do Around the Alpine Route & Where to Stay

The Tateyama-Kurobe Alpine Route can be accessed via Ogizawa Station on the Nagano-side of the mountain range or Tateyama Station, on the Toyama-side of the mountains. Nagano, Toyama and Kanazawa are stops on the Hokuriku Shinkansen, making the Alpine Route accessible from Tokyo. The route utilises a series of transports to ascend high into the Hida Mountain – often referred to as the ‘North Alps’ – and within 500 metres of the summit of Mount Tate or ‘Tateyama’. Considered one of Japan’s three most sacred mountains, along with Mount Fuji and Mount Haku, this is dramatic and striking landscapes that makes a strong impression on visitors.

Upon opening in mid-April, the Alpine Route is best-known of the immense ‘Snow Walls’ that rise to around 20 metres above the road while in summer and autumn, when the snow has melted away, a lush alpine landscape emerges – a landscape that can be explored along leisurely walking trails of 30-minutes to 2-hours or on more serious, multi-day hikes into the heart of the Chubu Sangaku National Park. We hope that the following information is of assistance when planning your visit to the Alpine Route. Let’s start with the most obvious question:

WHERE IS THE TATEYAMA-KUROBE ALPINE ROUTE?

Open to the public from mid-April until mid-November, the Tateyama-Kurobe Alpine Route combines a series of transports to ascend Japan’s highest mountain range to Murodo Station. At 2450 metres above sea level, Murodo lies just over 500 metres below the summit of Mount Tate – known in Japan as ‘Tateyama’ – one of Japan’s three most sacred peaks. The Alpine Route straddles the prefectures of Nagano and Toyama, allowing visitors to start on either side and cross into the other prefecture or return the way that they came. Whichever way you choose to do it, you need to allow at least 6 to 7-hours from start to finish – basically, it’s an all-day activity.

For visitors coming from Tokyo, starting from the Nagano-side of the Alpine Route at Ogizawa Station will be the fastest option while visitors coming from Kyoto, Tokyo or Kanazawa will find starting on the Toyama-side of the route at Tateyama Station is the most convenient option – however it’s also worth noting that the efficiency of Japan’s network allows you to get to either starting point from Tokyo, Kyoto, Osaka or beyond with a minimum of fuss. Ogizawa Station is located around 270KM /4-hours to the north-west of Tokyo and around 60KM / 70-minutes to the west of Nagano City, making Nagano Station the nearest major transport hub on the east side of the route, while Tateyama Station is located around 30KM / 50-minutes from Toyama Station on the west side of the route.

HOW TO GET TO THE ALPINE ROUTE

In this section you will find information on how to reach the Alpine Route from the following starting points:

We endeavour to keep this information as up-to-date as possible and in recognition that most international visitors will be using the train network to move around Japan, most directions are for using the trains. If there is alternative option i.e. express or local bus, that is notably faster or economical, we also include that information.

Nagano City is the starting point for many if not most travelers approaching the Tateyama-Kurobe Alpine Route from the east. Visitors starting at Nagano Station have the option of using a bus, train, taxi or tour to reach the Alpine Route. The bus to Ogizawa Station departs from Bus Stop No.25 – outside the East Exit – at Nagano Station and takes approximately 105 minutes. Alternatively you can also take a taxi from Nagano Station. You will find them outside the station’s Zenkoji Exit. Our Ogizawa Station page provides full details including daily bus schedules to and from the station.

Without doubt, the easiest and most enjoyable ways to reach the Alpine Route is on a guided tour. From April until November we offer two group tours starting from Nagano City that transports you to the summit of the Alpine Route, accompanied by a locally-based guide.

Karuizawa is one of Japan’s most popular mountain resort towns and a stop on the Hokuriku Shinkansen line, making it easy to reach the Alpine Route via Nagano. Take the shinkansen from Karuizawa Station to Nagano Station – 25 min / JPY3210 – and follow the directions above onto Ogizawa Station.

FROM TAKAYAMA / between 3 to 4 hours

Visitors heading to the Alpine Route from the beautiful old town of Takayama can do so using the Limited Express Hida from Takayama Station to Toyama. Taking approximately 90 minutes and costing JPY2890, there are only two or three convenient services each day and the line is popular with tourists, so if you have the chance to book ahead it can be helpful. Once in Toyama, follow the directions above.

The Nohi Bus company also operates several daily services from Ogimachi – the main village of the World Heritage-listed grouping of Shirakawa-go and Gokayama – and Toyama Station. It takes approximately 60 minutes to reach Toyama from Ogimachi. Adults should expect to pay around JPY1730 one-way or JPY3120 return. Once in Toyama, follow the directions above. Alternatively, take the bus onto Takayama Station and follow the directions above. See the following page for information including timetables and fares to and from Takayama.

From the Kamikochi Bus Terminal, take the bus to the Hirayu Onsen Bus Terminal – 25 to 30 minutes – and then switch to the bus headed to Takyama – another 60 minutes. Once in Takayama, follow the directions above. See our ‘Kamikochi’ page for further details along with the following page for information including timetables and fares to and from Takayama.

One of the most historic and enjoyable cities in Central Japan, Matsumoto is an easy location from where to access the Alpine Route. Take the Oito Line from Matsumoto Station to Shinano-Omachi Station – approximately 60 minutes – and then board the local bus to Ogizawa Station, another 40 minutes.

Nagoya is the largest city in Central Japan however there is no direct route from Nagoya Station to the Tateyama-Kurobe Alpine Route but instead, several ways of getting there – all of which take time. One option is to make the journey via Kanazawa Station. To do so, take the Limited Express ‘Shirasagi’ – 180 min / JPY6930 –  and then follow the directions above onto Toyama and the Alpine Route. Alternatively, you can also make the journey via Takayama – a great way to combine some of the region’s best destinations. To do so, take the Limited Express ‘Hida’ – 140 min / JPY5610 – and then the same service onto Toyama – 90 min / JPY2890 – as described above.

Visitors coming from Tokyo have the option accessing the Alpine Route via Nagano or Matsumoto. The Hokuriku Shinkansen line connects Nagano Station with Tokyo Station. Regular services throughout the day make the journey quick and easy, taking between 80 and 110 minutes depending on which service you choose. Once in Nagano, follow the directions above. Matsumoto Station is connected to Shinjuku Station using the Limited Express ‘Azusa’. Taking 2.5 hours, once in Matsumoto follow the directions above.

FROM NARITA AIRPORT / between 5 to 6 hours

For visitors heading to the Alpine Route directly From Narita Airport, it will be easiest via Nagano Station and then heading onto Ogizawa Station. Two rapid train services connect Narita Airport to central Tokyo, from where you can use the Hokuriku Shinkansen line to reach Nagano.

1 / the Narita Express (NEX) runs from Narita to Tokyo Station. It takes 55 minutes to reach Tokyo Station (depending on the service) and costs JPY3070 with trains departing every 30 to 60 minutes. Once at Tokyo Station, follow the directions above to Nagano and then onto the Alpine Route.

2 / the Keisei Skyliner runs from Narita to Ueno Station. It takes between 40 to 55 minutes to reach Ueno Station and costs JPY2520 with trains departing every 30 to 40 minutes. Once at Ueno Station, transfer to the Hokuriku Shinkansen bound for Nagano and then follow the directions above onto the Alpine Route.

FROM HANEDA AIRPORT / between 5 to 6 hours

The Alpine Route can be reached in a multi-step journey from Haneda via 1. using the Hokuriku Shinkansen from Tokyo Station to Nagano Station, or 2. using the Limited Express Azusa from Shinjuku Station to Matsumoto Station. We recommend making the journey via Nagano Station as its notably quicker. Two train services connect Haneda Airport to central Tokyo, from where you can use the Hokuriku Shinkansen line to reach Nagano.

As explained above, the Tateyama-Kurobe Alpine Route can be accessed via the Toyama or Nagano-side. For travelers coming from Osaka or Kyoto, accessing the Alpine Route via the Toyama-side will be the most convenient. Osaka and Kyoto are connected to Kanazawa by the Limted Express ‘Thunderbird’. Frequent services run between the cities and involve the following travel times and costs: 150 to 155 minutes / JPY7260 from Shin-Osaka Station and 125 minutes / JPY6490 from Kyoto Station. Once at Kanazawa, follow the directions above onto the Alpine Route. Should you wish to access the Alpine Route via the Nagano-side, take the Tokaido Shinkansen to Tokyo and follow the directions above.

Central Japan offers many, many reasons to visit. Operating all year round, we are Nagano’s No.1-rated tour and charter operator, offering a range of services including group tours, private tours and charters. We can arrange transport including a private vehicle and driver, to transport you to, from and between any regional destination including the Tateyama-Kurobe Alpine Route.

Our drivers and vehicles are fully certified, allowing us to transport you to and from your preferred destinations in combination with any activity that suits your schedule. All vehicles are fitted with a protective screen – separating the driver from passenger and luggage area – and our drivers wear protective masks, allowing you to move between your destinations in comfort and safety.

Got a question about visiting the Alpine Route and Central Japan? Contact us and let’s get planning together! 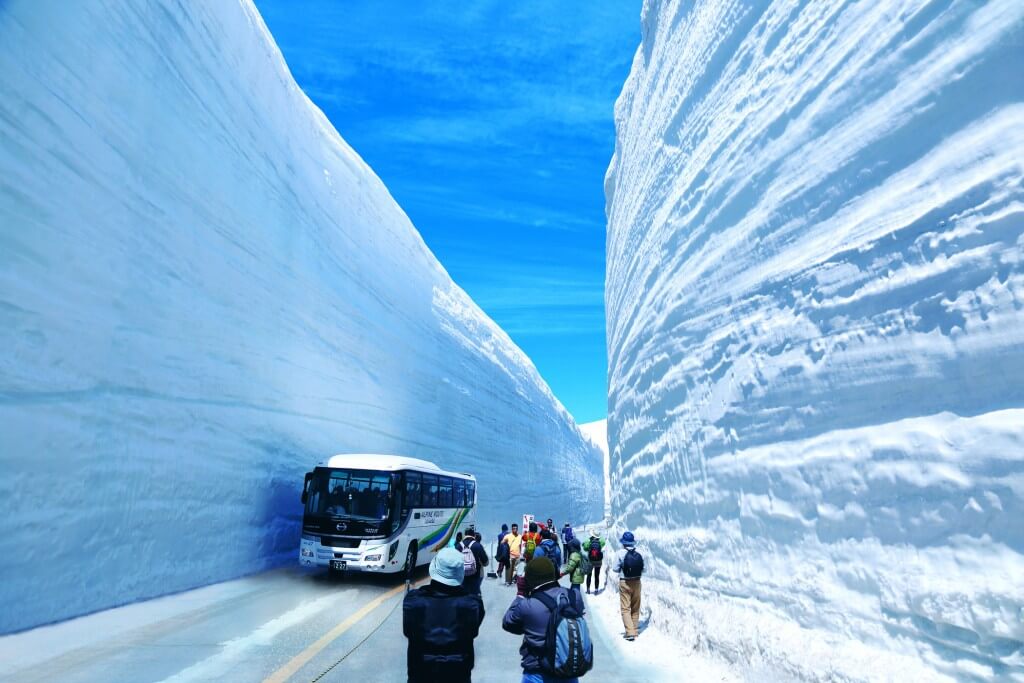