The monkeys of Jigokudani are most famous for their unique behaviour of soaking in hot springs. But it is just one of several interesting behaviours to observe while in the park:

Without doubt the thing that the macaques are most famous for is their fondness of a hot ‘onsen‘ (natural hot spring) on a cold day. Having learned the behaviour through observing humans doing the same, the monkeys of Jigokudani Monkey Park are the only troop in the world known to have taught themselves how do enjoy an onsen.

While they spend the most time in the hot spring during winter, the monkeys engage in this behaviour throughout the year, with younger monkeys enjoying swimming and splashing in the warmer months of spring and summer.

Visitors to the park are certain to see the monkeys engage in an endless regime of grooming. Grooming helps social bonds between monkeys and reflects their status within the troop.

While also performing the basic function of being hygienic – indeed visitors to the park will notice how clean the monkeys appear and they lack of odour – it is perhaps most important in bonding families or as an expression of interest between potential mates.

Regardless of the time of year that you visit, you are certain to witness the monkeys picking at their own fur or grooming anothers.

The loudness and tone give the call the emotion with screeching convey aggression and fear.

Young monkeys are incredibly playful and is most obvious in the eagerness with which they wrestle everyday, all day. Even the midst of winter you will find infants rough-housing it up, sometimes to the dismay of their mother. The wrestling could, especially in the case of males, end up in wounds and screaming as they are not really careful in their playfulness.

Wrestling and play-fighting is done in jest but plays an important role in teaching the younger monkeys how to assert themselves within the troop. As they mature, they skills they learn will be put to more serious use in the scraps and squabbles that determine social status within the troop.

But while younger, observing the younger monkeys tussle and roll-around en-masse is one of the most adorable behaviours you will see in the park.

Monkeys love sunbathing. They warm themselves by laying with their backs on the ground and exposing their bellies to the sun.

Sometimes by themselves but just as often with their families, the monkeys love to doze and relax in the sun.

This is especially true in winter, during which time the monkeys will take full advantage of the sun to stay warm.

The monkeys regularly mount each other. Obviously one of the main purposes of this – especially in autumn – is mating. However, visitors to the park might be confused to see a male mount another male or a female mount a male or another female monkey.

This is do to assert dominance. Lower monkeys will not protect and subject to this behaviour of dominance. This extends to young monkeys – too young to breed – who can sometimes be see mimicking the behaviour by quickly mounting each other

There are plenty of quarrels between the monkeys. There is a definite ranking system which dictates what one’s place is in the monkey world but sometimes snow monkeys want to get ahead in the pecking order. Rising in rank and ascertaining authority over the other are the main reasons for fights between the Japanese macaques.

The monkeys are naturally curious and introduction of any new object to the park will provoke considered investigation.

So standby, anything new in the park is sure to be met with lots of prodding until its presence fades into the background and the young monkeys can start searching for their next entertainment. 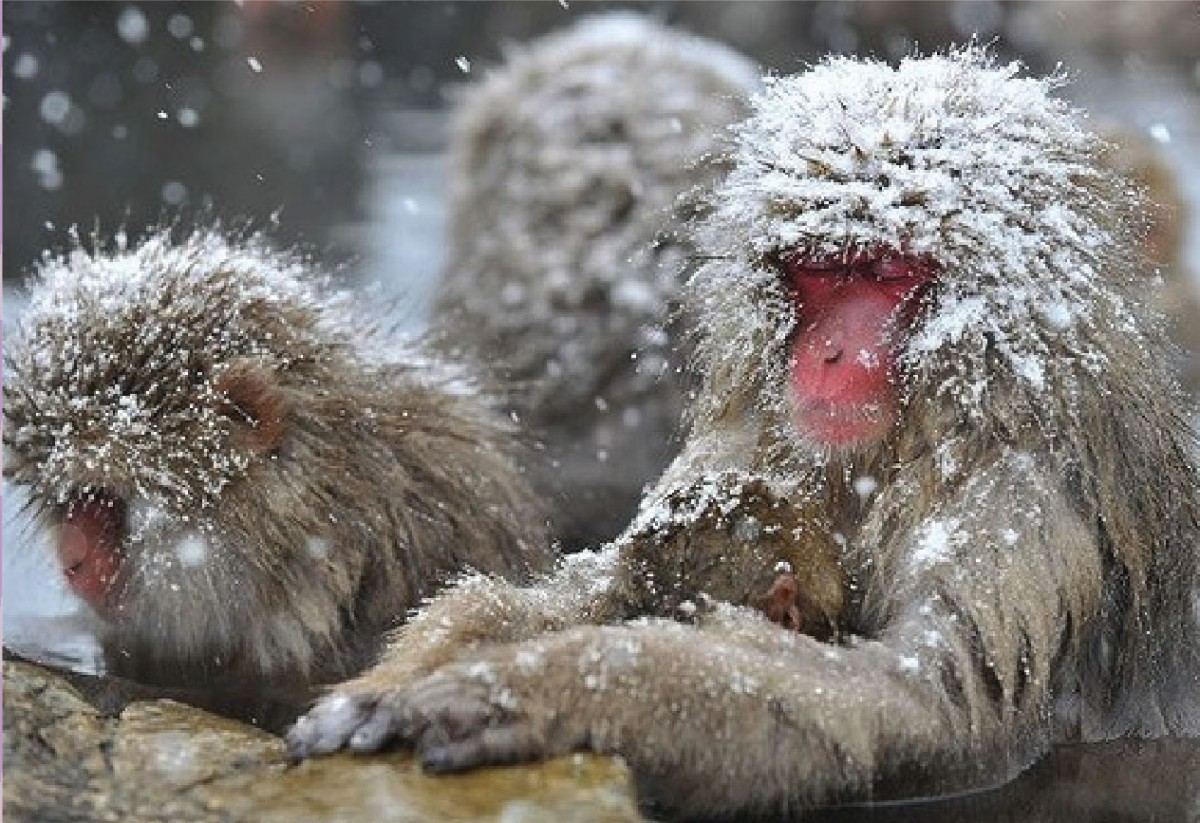