History Of The Jigokudani Monkey Park

First established in 1964, the Jigokudani Monkey Park and its famous residents have become globally famous and now attract visitors from all over the world. The troop of macaques that comes into the park is wild and free to come and go as it pleases. The story of why they are so fond of coming and the history of the park are quite fascinating and worth understanding before you visit for yourself.

The founding of the park is thanks to a man called Sogo Hara. An employee of the Nagano Electric Railway (Nagano Dentetsu), Hara was a keen hiker who discovered the original troop while trekking through an area known as Jigokudani, or the ‘Valley of Hell’, in 1957. The area was named as such due to its steep mountains and the smell of sulphur emitting from the natural hot springs that bubble to the surface in the valley. Hara marvelled at the monkeys and from that point onward became entwined in their future and story.

At that time the monkeys faced several threats due to human encroachment into their native habitat. Of central concern was the development of ski resorts, including installation of chair lifts and cutting of trees to create ski runs, in the surrounding mountains from the early-1950s onward. As ski resorts were development, Hara observed a dramatic decrease in the number of monkeys who had no choice but to migrate to the lower mountain regions, including Jigokudani, and into areas of human habitation in Yamanouchi.

As the monkeys appeared more frequently in villages, they began raiding crops from farms, to the understandable dislike of local farmers. Before long the community reacted with farmers hunting down the monkeys, raising the ire of Soga Hara, and driving his efforts to ensure the protection of his beloved monkeys. Around the same time, the owners of a local inn called ‘Korakukan’ located just outside the monkey park – pictured above – had come to respect Hara’s effort to protect the monkeys and fond of the monkeys themselves. Agreeing with Hara that they needed to entice the monkeys back into the mountains for their own preservation, the owners of Korakukan began to leave apples outside their inn. Over time, the monkeys were led by their stomachs back into the valley and to the park and guesthouse.

It’s a this point the story becomes a little unclear. As an ‘onsen’ guesthouse, Korakukan has both indoor and outdoor hot springs. As the only guesthouse in the Jigokudani area, Korakukan had long been known for the restorative powers of its waters and some people say that over time, the monkeys observed humans soaking int he outdoor hot spring and before long, copied the behavior themselves; while an alternate account states that one day a some apples hand fallen into the hot spring, and while reaching-out to grab one, a young monkey tumbled into the pool only to discover that it felt good. It wasn’t long before other monkeys followed the lead and entered the hot spring to soak and thus became the only monkeys in the world known to enjoy bathing in onsen. Soon after, a man named Tomio Yamada first photographed this unique behaviour and thus the legend of the bathing snow monkeys of Jigokudani was born!

While sight of bathing monkeys immediately proved popular with visitors, there were serious ramifications for the guesthouse, not least the hygiene of their water of (human) guests. With all of these issues in mind, Soga Hara led the movement to establish the monkey park – somewhere his cherished monkeys would be safe. Baths were created in the park just for the monkeys, using the local hot spring source. Fencing was considered to keep the monkeys away from human villages however ultimately rejected due to cost and a wish to not deny the freedom of the monkeys.

Thus the daily practice of feeding the monkeys began, to incentivize them to remain in the park rather than head to the villages below where they were considered to be pests. This process of trial and error eventually revealed their preferred food – raw barley and soybeans (3 times per day) with apples for snacks during the green season. This practice continues to this day. It is important to note that the monkeys remain wild and still need to fend for themselves. The rangers are careful not to overfeed them or make them reliant of barley, soybean, and apples they provide. The food is an incentive to come but not enough to survive on.

Around ten years ago, the park experimented with allowing visitors to feed the monkeys however it was quickly discovered that this made the relationship between monkeys and visitors more tense and aggressive, taking away from the enjoyment of observing the monkeys in their near-natural state. Visitors to the park are no longer allowed to feed the monkeys and over generations, the resident troop has become very accustomed to human company allowing for a unique experience and close proximity observation of these fascinating creatures.

While extremely popular with visitors from all over the world, the park remains first and foremost, a place of conservation and within the natural territory of the troop. It is an important place for scientific observation and study and we ask that you always follow the park rules when visiting the Jigokudani Snow Monkey Park.

WANT TO LEARN MORE ABOUT THE MONKEYS?

Based in Nagano and operating all-year-round, we offer a number of group tours that include a visit to the monkey park. All tours are led by locally-based guides and combine a visit to the park with another great destination, activity or event including lunch or dinner. Our tours are fun, interactive and family-friendly. For a more information and a listing of all tours on offer, click on the banner or button below.

Of course, we also offer private tours and transport to the monkeys and any regional destination. Our drivers and vehicles are fully certified, allowing us to transport you to and from your preferred destinations in combination with any activity that suits your schedule. All vehicles are fitted with a protective screen – separating the driver from passenger and luggage area – and our drivers wear protective masks, allowing you to move between your destinations in comfort and safety.

Got a question about visiting the monkeys? Click the ‘INQUIRY’ button below or contact us and let’s get planning together!

NEED ASSISTANCE WHILE AT THE PARK?

Need assistance while at the park? The Snow Monkey Resorts Info & Gift Shop is located at the entrance of the trail leading to the Jigokudani Monkey Park. Offering a range of services including winter rentals and English language information, luggage storage, along with monkey merchandise and souvenirs including official Snow Monkey Resorts products, the SMR Info & Gift Shop has you covered when visiting the park. Open from early October until late May, 9AM to 5PM, English-speaking staff can answer your questions on your way to and from the park including bus timetables and information about nearby attractions.

Can’t make it to us? Let us come to you! Our Snow Monkey Resorts Online Shop has you covered for all your monkey needs including official merchandise and travel products. We ship both inside Japan and internationally. All your monkey needs are now just one click away! 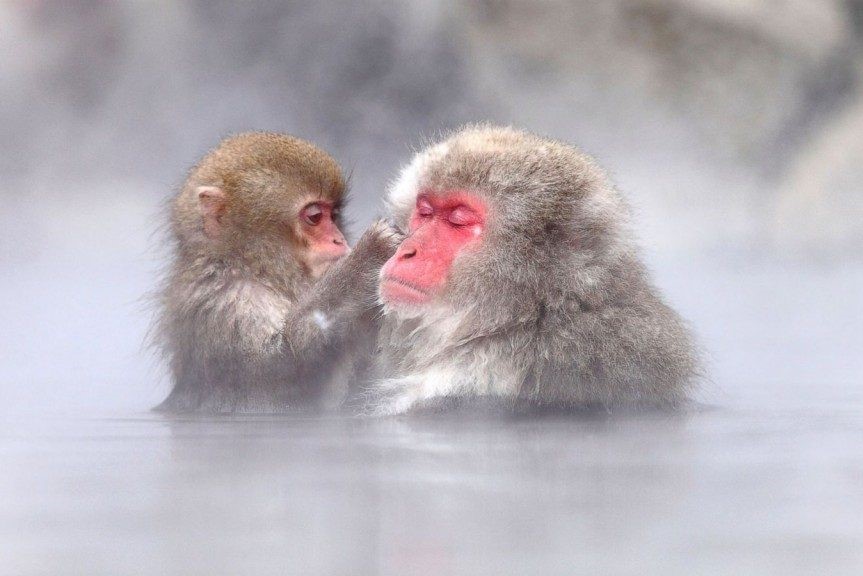