DESTINATIONS
05. NAGANO CITY & TOGAKUSHI
15 Things to Do in Matsushiro
BACK TO LIST

15 Things to Do in Matsushiro

Located 12km to the south of central Nagano City, Matsushiro is a small town known for its samurai heritage and former stronghold of the Sanada clan. Originally from Ueda, the Sanada clan relocated to Matsushiro during the 17th century.

An important strategic base during the Sengoku (Warring States) Period and thriving domain of the samurai class during the Edo Period, the Sanada clan accumulated great wealth and power and played an important role in Japanese history.

Beneath its feet, Matsushiro is also home to an open secret… Constructed in the final months of World War II, the Zozan Imperial Wartime Tunnels were excavated as the intended headquarters from the Japanese military, government and Imperial Family.

The war ended before the tunnels were completed or used but still exist today and can be visited by the public – a poignant, sombre yet very important testament to the huge cost of war on all sides.

Here are our tips and suggestions for 15 Things to Do in Matsushiro:

1 / Matsushiro Castle Park / all year round

If you are arriving in Matsushiro using the public bus, look to your right past the old train station and you will see the backside of Matsushiro Castle Park.

Boasting many beautiful cherry blossom trees within the walls of the old castle, the park sits on the foundations of the former castle with several reconstructed buildings including the gate maintaining the historic character of the grounds.

Only the foundation walls and surrounding moat are original yet the park is well-worth visiting and offers great photography opportunities, especially in spring!

The inner grounds of Matsushiro Castle Park boasts many mature cherry blossom trees. Known as ‘sakura’ in Japanese, the flowers typically bloom in early April – although the exact timing varies from year to year.

Admission to the park is free however it is only open from 09:00 to 17:00, with the last entry at 16:30. The Matsushiro Spring Cherry Blossom Festival – see below for details – takes place in and around the castle grounds on the second Saturday in April – a great time to experience the blossoms.

Should you miss the festival or peak bloom, it is still worth visiting the park as petals drop from the trees into the surrounding moat, a truly beautiful sight.

3 / Sanada Family Residence / all year round

Built by Sanada Yukinori in 1864 – at a time the original castle was still standing – the Sanada Family Residence first served as home to his mother-in-law, before becoming his own retirement house in his later years.

The Sanada Residence continued to be used by the Sanada family until it was donated to Nagano City in 1966.

Declared a National Historic Site in 1981, the building consists of fifty-three rooms and extensive gardens.

While there is little English information inside the residence, QR codes accompanying Japanese displays allows visitors with smart phone to translate the text to English.

Opened in 1855, the ‘Matsushiro Bunbu Gakko’ is alternatively referred to as the ‘Matsuhiro Bunbu Military Academy’ or more formally, the ‘Old School for Literary and Military Arts’.

Instituted to educate the sons of higher status samurai in marital arts, traditional literature and arts along with Western medicine and military science, the former school has recently been beautifully restored.

Nine buildings including the main school building and several ‘dojo’ for marital arts training make-up the school, which can be visited purely for sightseeing or to enjoy a range of samurai and traditional experiences – see below.

An interactive/digital shooting gallery will also soon be opened, allowing visitors to handle and use replica guns that students were also trained to use, including matchlock rifles.

5 / Samurai & Traditional Experiences / all year round

Visitors to the Matsushiro Bunbu Gakko can try their hand at a range of skills and practice previously taught to attending students including archery and marital arts or more serene practices such as tea ceremony and flower arrangement.

Available from Monday to Friday, bookings must be made in advance.

Excavated in the final months of WWII, the Zozan Imperial Wartime Tunnels were the intended headquarters of the Japanese military and government during the expected invasion by the Allied Forces.

An extensive network of tunnels and subterranean bunkers were around 75% completed when the war came to an end and were as a result, never used.

Formally referred to as ‘Matsushiro Daihonei’ or the ‘Matsushiro Underground Imperial Headquarters’, a 500 metre tunnel remains open to the public. Excavation was undertaken by an estimated 10,000 forced labours, most of whom were Korean prisoners of war or indentured workers. It is also estimated that around 1,500 died during the construction. Korean comfort women were also on-site, adding further poignancy and political sensitivity to any visit or interpretation of the tunnels.

Zozan Shrine is dedicated to Zozan Sakuma (1811-1864), who played an important role in advocating for Japan to open-up to the world after a long period of isolation.

Known for his rare intelligence and education in numerous studies, Zozan was assassinated by a pro-imperial samurai in 1864 however before that event, he was instrumental in educating many people who would play important roles in ultimately opening Japan to the world and leading to its modernization.

The shrine has a strong association with wisdom and education and many Japanese students come here to ask for perseverance with their studies, and ultimately, success in entering and graduating their chosen schools and universities.

8 / Former Higuchi Residence / all year round

Open to the public since 2010, the Former Higuchi Residence was the home of a high-ranking samurai during the Edo and Meiji Periods.

Located nearby other popular attractions including the Sanada Treasures Museum, Sanada Residence, and Bunbu Literary & Military School, visitors eyes will be drawn by the home’s large thatch-roof. Inside the grounds, visitors will discover a beautifully preserved home and gardens covering more than 2000 m², of all which offers fantastic photography opportunities and a glimpse of old Japan.

9 / Yamadera Jyozan Residence / all year round

Along the road leading from the town centre to the Zozan Imperial Wartime Tunnels, visitors will pass the Yamadera Jyozan Residence – the former home of the Yamadera family.

As a middle-ranking samurai family, the well-preserved home and grounds provides a valuable insight about the daily life during the Edo Period. The home includes reception rooms for visitors, drawing room, general quarters and tearoom – particularly beautiful in the autumn.

The distinctive front gate – the longest in Matsushiro – and exterior walls are certain to grab your attention as you move to and from other popular attractions making the Yamadera Jyozan Residence well-worth visiting.

10 / Sanada Treasures Museum / all year round

The Sanada Treasures Museum is a large building standing in front of the Sanada Residence and Matsuhiro Bunbu Gakko.

The museum houses a large collection of artefacts once owned by the ruling-Sanada clan including ceramics, furniture, manuscripts weaponry and armour.

Vistiors will be drawn to two notable samurai suits of armour while fans of Japan’s unique ‘yokai’ (phantoms or ghosts) culture will enjoy looking over multiple manuscripts that are beautifully decorated with all manner of misbehaving ghouls and curious beings.

Tickets covering admission to multiple attractions can be purchased at the museum, with rental bicycles also available from the adjacent Matsushiro Tourist Information Center.

The Matsushiro Spring Festival takes place on the second Saturday in April, within the grounds of Matsushiro Castle Park.

Running from 09:00 in the morning, families and friends head to the park for ‘hanami’ (flower-viewing) and to enjoy the events and food vendors selling spring snacks and drinks. At night, the grounds of the castle park glow pink and red as around 500 paper lanterns offer soft light underneath the trees.

Taking place on the second weekend of October – on both Saturday and Sunday – the festival celebrates Matsushiro’s samurai heritage and the importance of the former rulers, the wealthy Sanada clan.

Centred around the grounds of Matsushiro Castle Park, the first day is full of traditional music and dance performances with people of local food vendors selling tasty snacks and drinks. On the second day, the festival really comes to life with a day of traditional artillery displays, taiko and dance performances and ceremonial parade of samurai and their attendants in full regalia.

If you have any interest in the Japan’s samurai past, this festival is not to be missed.

Extensively damaged by fire in 1875, the buildings of Obakushu Zozan Emyozenji Temple – including a main hall, mausoleum, belfry, bell tower and library – were reconstructed in 1894.

Graves of several important figures in Matsushiro’s history are located within the grounds of the temple with several distinctive features and statues inside the main hall.

Tucked-away behind residential buildings, the Takeyama Zuigo Inari Shrine is, in itself, not going to capture anyone’s attention for long but for visitors passing by, enroute to the Yamadera Jyosan Residence and Zozan tunnels, passing through the torii gates and climbing up to the shrine affords a view over Matsushiro.

Looking back toward the mountains, from this point visitors can have an appreciation of the extent of the tunnels, which are said to stretch from the nearby entrance all the way to the mountains you are looking toward.

An ideal place for quiet reflection.

Hidden away in the side street and laneway of Matsushiro, the grounds surrounding Chokoku-ji Temple also house the mausoleum of the first lord of the Sanada clan, Sanada Nobuyuki.

The distinctive black façade of the mausoleum is intricately decorated with gold-leaf and colourful designs, in a style reminiscent of the famous temples of Nikko.

A little tricky to navigate your way to but a good destination to seek-out for those renting bicycles and planning to spend the day in Matsushiro.

For guests wanting to visit Matsushiro in the comfort and convenient of their own vehicle, we can arrange private tours and charters customised to fit your needs including starting and ending at any destination.

Locally-based and operating all year round, we have the expertise and experience to help you get the most out of your time in the region including combining your visit to Matsushiro with the nearby Jigokudani Monkey Park or any other attraction.

Our drivers and vehicles are fully certified, allowing us to transport you to and from your preferred destinations, in combination with any activity that suits your interests and schedule.

We can arrange both private tours with an English-speaking guide or a private charter, including a private vehicle and driver but without a guide – whichever works best for you!

Awarded a 2019 TripAdvisor Travelers’ Choice Award for our 1-Day Snow Monkeys, Zenko-ji Temple & Sake Tour – recognised as one of the Top 10 Experiences in Japan – Snow Monkey Resorts is Nagano’s No.1 tour and charter operator.

Locally-based and operating all year round, we offer the local knowledge, support, and service that you need to get the most out of your adventure in Japan.

Got a question about visiting Matsushiro? Feel free to contact us at snowmonkeyresorts@machinovate.com and let’s get planning together! 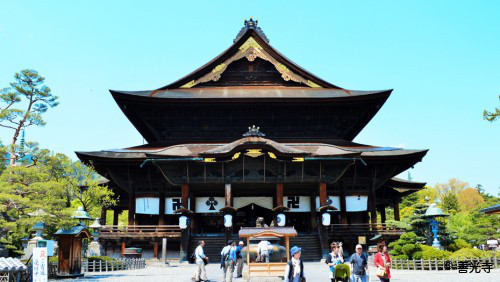