Most famous for its beautiful castle, Himeji is a small city that also boasts one of Japan’s most impressive Buddhist temple complexes. On this page you will find the following information:

— Best Things to Do In & Around Himeji

— Best Area to Stay in Himeji

— How to Get to Himeji

Located just under 100km to the west of Osaka, Himeji is a popular destination for many international visitors thanks solely to its iconic castle. The largest remaining original castle in Japan, it is also considered the most beautiful – a registered National Treasure and a World Heritage site. Adjacent to the castle, you can also enjoy the beautiful Kokuen Garden along with the Shoshazan Engyo-ji Buddhist temple complex lying with easy reach. These three attractions account for the main places of interest in Himeji, with the three combining to provide an engaging one day itinerary.

Away from those three attractions, Himeji doesn’t have a lot to hold the interest of international. As such, it’s a good idea to combine your visit to Himeji with nearby destinations such as Kobe, Osaka, Kyoto and Nara, or even Hiroshima which lies around 240km to the east of Himeji but is quick and easy to reach using the San’yo Shinkansen – see below for details.

Himeji is a small city in Hyogo Prefecture in the Chugoku region of western Japan. Kobe is the nearest major city – around 60km to the east of Himeji Station – with Osaka also located to the east – around 95km from Himeji. To the west, Okayama is also around 95km from Himeji while Hiroshima sits around 240km to the west. Himeji along with all of the cities mentioned – Osaka, Kobe, Okayama and Hiroshima – are stops on the San’yo Shinkansen line making them quick and easy to move between. Most visitors heading to Himeji will do so as a day-trip or overnight visit, before moving onto their next destination.

BEST THINGS TO DO IN & AROUND HIMEJI

If you’re considering heading to Himeji then it’s almost certainly the city’s famous castle that is tempting you to visit. As Japan’s largest and best-preserved original castle, Himeji is also considered the most beautiful and is well-worth making the effort to get there. While in Himeji, Kokoen Garden and Shoshazan Engyo-ji rank among the most rewarding destinations in the region and combine to create an enjoyable day-trip. Other than those attractions however, Himeji doesn’t have much to hold your interest and can therefore also be combined with other great destinations in nearby Kobe, Osaka and beyond. But let’s start with the one destination that puts Himeji on the map:

1 / HIMEJI CASTLE / all year round

Afforded World Heritage status in 1993, Himeji Castle is widely regarded as the most impressive of Japan’s few remaining feudal castle structures. It is the most visited and largest castle in Japan, consisting of eighty-three rooms and a defensive system of monumental foundation wall and moats. While a fortified structure has stood for many centuries, the current castle dates back to 1609 making it one of the oldest and best preserved of Japan’s few remaining original castles. The castle underwent extensive renovation over recent years and was fully reopened to the public in 2015. Today, visitors are greeted by a labyrinth-like approach to the castle and series of winding paths and gates that encourage a sense of exploration and discovery.

Himeji Castle is often referred to as ‘Hakuro-jyo’ or ‘Shirasagi-jyo’, translating as ‘White Egret Castle’ and ‘White Heron Castle’ respectively – names inspired by its stark white walls and upward-lifting roof tiles that many people believe to resemble a bird taking flight. The castle certainly seems to be lifting from the ground and floating above the world below, one of the region’s most iconic and photogenic sights.

Open daily from 09:00 to 17:00 (or until 18:00 from mid-April until the end of August), last admission is 30 minutes prior to closing – noting that the garden is closed for two days over Dec.29-30. Admission is JPY1000 or you can purchase a joint castle and Kokoen Garden admission ticket for JPY1050. You can reach the castle on-foot from Himeji Station. Departing the station from the North Exit, follow the signs to the castle by walking down Otemae Dori (Otemae Street) – a walk of 15 to 20 minutes. Alternatively, it’s a 5 minute bus ride / JPY100 or a taxi will cost around JPY750.

2 / KOKOEN GARDEN / all year round

Kokoen is a relatively new but beautiful traditional Japanese garden located next to the castle. Opened in 1992, the garden lies on the former residence of a feudal lord and consists of nine walled gardens, each designed in a style reflective of the Edo Period (1603-1868). The garden covers 3.5 hectares and incorporates varying landscaping themes including a ‘Tea Ceremony Garden’ in which visitors can enjoy sit for tea and traditional snacks in the ‘Soujuan’ tea house; with of course the option of also partaking in a traditional tea ceremony while there.

The garden design uses the remains of walls and passageways from the previous 16th century buildings to delineate the nine gardens with water features including a central ‘koi’ pond waterfall, bamboo groves and manicured pines all present. The overall design is intended to reflect the four seasons of Japan with each time of year imbuing the garden with its own beauty, arguably at its most spectacular in October to November when the autumn leaves put on a striking display.

Open daily from 09:00 to 17:00 (or until 18:00 from mid-April until the end of August), last admission is 30 minutes prior to closing – noting that the garden is closed for two days over Dec.29-30. Admission is JPY310 or you can purchase a joint garden and castle admission ticket for JPY1050. The garden is located next to the castle.

Located 30 minutes from the city centre, Engyo-ji is a beautiful temple with a history stretching back more than one thousand years. Multiple buildings make-up the temple complex, including the ‘Niomon’ Gate, the ‘Maniden’ – a temple sitting on pillars and overlooking a steep slope – and the ‘Mitsuno-do’ – three large temple halls including the ‘Daiko-do’ (main hall), the ‘Jiki-do’ (traditional lodging and dining hall) and the ‘Jogyo-do (training hall).

The temple complex is accessible using the Mount Shosha (Shoshazan) Ropeway – see below for details. Located around 10 to 15 minutes walk from the top station of the ropeway, the temple buildings are spread through a heavily forested area with little modern infrastructure immediately around the them. As such, the overall area retains its historic character and is often used for television and film production. Engyo-ji is the 27th of 33 sacred temple which make-up the ‘Kannon Pilgrimage’ route in Saigoku. One of Japan’s most photogenic temples, visiting Engyo-ji works well with a visit to Himeji’s famous castle. To reach the temple complex you will need to make sure of the Mount Shosha Ropeway – see below for details including how to get there.

The Mount Shosha (Shoshazan) Ropeway is the primary means of access to the Enjgyo-ji temple complex therefore anyone heading to the famous temples will certainly make use of it. It is however also listing as an activity in its own right as it also opens-up the option of walking the trails of Mount Shosha, which the ropeway provides access to at all times of year. The large ropeway car accommodates up to 60 passengers and affords fantastic views as you ascend to the top station. The ropeway operates all year round with varying hours of operation. No matter the time of year you visit, the ropeway starts operating from 08:30 and until 17:45 from March until mid-October and until 16:45 from the second half of October until the end of February. The final car down is 15 minutes after the final car up, noting that there are extended on certain days i.e. some weekends and public holidays.  A one-way fare costs JPY600 for adults and JPY300 for children or JPY1000 / JPY500 for a roundtrip ticket. To reach the ropeway, take the ‘8 – Mount Shosha Ropeway’ bus service from Bus Stop No.10 outside the North Exit of Himeji Station. The bus can also be boarded at the stop at Himeji Castle. It’s a 25 to 30 minute journey to reach the ropeway with services running every 20 minutes. It costs JPY280 one-way.

Only 15 minutes from Himeji using the San’yo Shinkansen to Shin-Kobe Station, Kobe is a vibrant city that can be explored on-foot including its historic districts of Kitanocho and Nankinmachi, the modern bay and harbour district, or a little further afield, and the ‘sake’ district of Nada. Our ’15 Things to Do Around Kobe & Where to Stay’ page has some great suggestions of what’s on offer there and the best areas to stay including accommodation listings.

6 / VISIT HIROSHIMA / all year round

Another stop on the San’yo Shinkansen line, Hiroshima can be reached in around 60 minutes from Himeji. Occupying a poignant place in the global consciousness, visitors to Hiroshima will no doubt be aware of the city’s tragic history – a history beautifully commemorated by the Hiroshima Peace Memorial Museum. Our ’15 Things to Do Around Hiroshima & Where to Stay’ page has some great suggestions of what’s on offer there and the best areas to stay including accommodation listings.

Shin-Osaka Station is the eastern terminus of the San’yo Shinkansen line, around 30 minutes from Himeji. Marking the border of western and central Japan, the cities of Osaka, Kyoto and Nara are all firmly established as popular destinations for international visitors and offer some of the best destinations and experiences in the country. Our ’40 Things to Do in Kyoto, Nara & Osaka’ page has some great suggestions of what’s on offer there and the best areas to stay including accommodation listings.

BEST AREA TO STAY IN HIMEJI

When staying in Himeji, the area around Himeji Station has the great number of accommodation options, most of which are within a short walk of the station itself:

Visitors wishing to stay overnight in Himeji will be best-served to book accommodation in the area around Himeji Station. As a stop on the San’yo Shinkansen line running from Shin-Osaka Station to Hakata Station, Himeji is easy to move to and from, and especially so when staying nearby the station. in this area you’ll find the great concentration of accommodation in the city, most of which are mid to large Western-style hotels, including business hotels. For more information including accommodation listings, see our ‘Himeji Station Area’ hotel page.

HOW TO GET TO HIMEJI

A convenient stop on the San’yo Shinkansen line, Himeji Station is easy to move to and from with the city’s main attractions within easy reach of the station. Our ‘How to Get to Himeji’ page has everything you need to know about how to get there from starting points including Kobe, Osaka, Tokyo and beyond.

Heading to Himeji using the rail system is quick, easy and comfortable. Unfathomable in its size and efficiency, moving around the country by train opens-up all regions of Japan for exploration. Our ‘Plan Your Visit’ page has everything you need to know about visiting Japan – from tips on the best time to travel, times to avoid, entering and exiting the country, money matters, staying connected, accommodation, staying safe and healthy and plenty more to ensure that you get the most out of your time here. 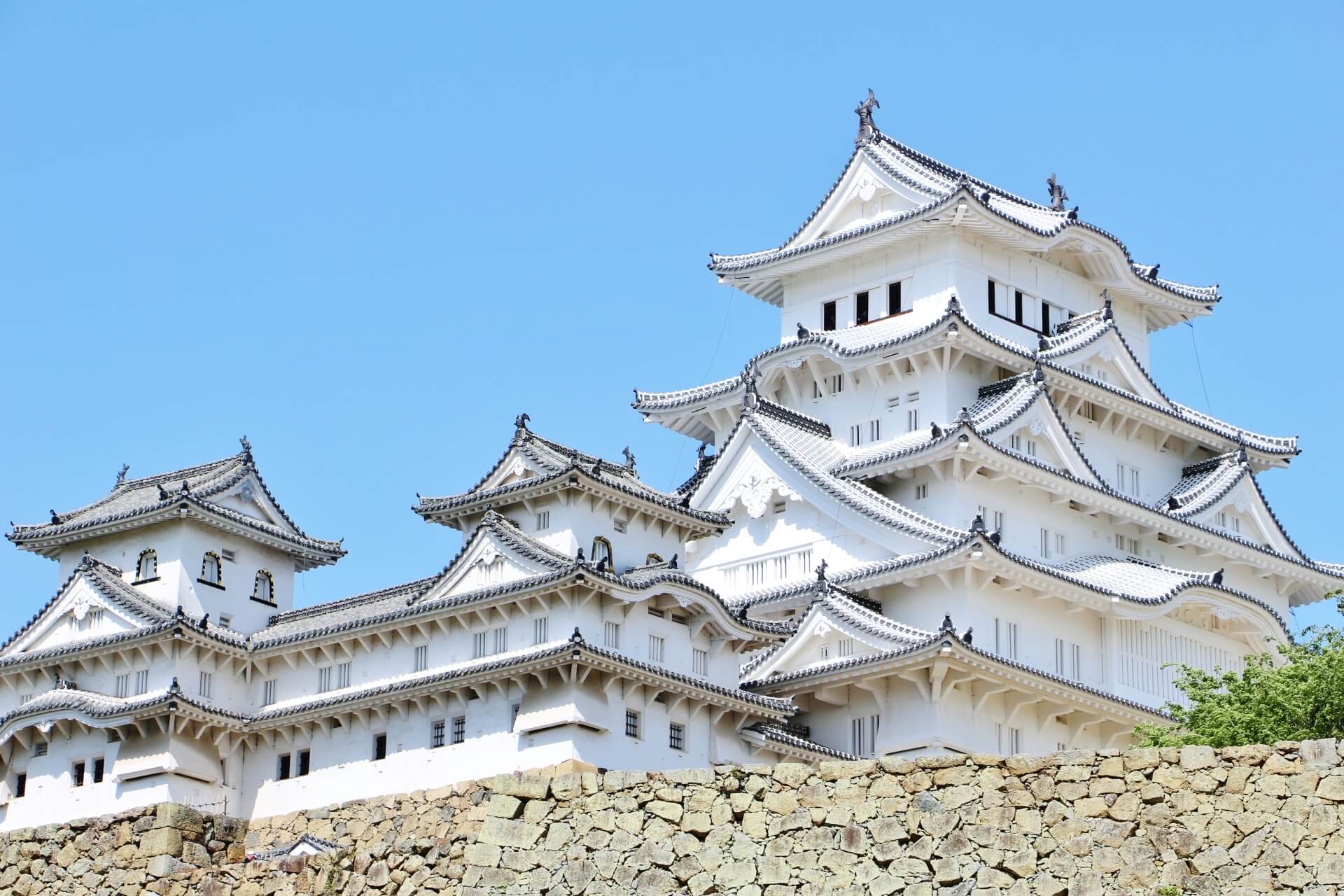