Located at the very heart of Japan – in every sense of the word – Nagano is a great place to live, work and invest for many reasons. Here are ten of the most attractive points about life in Nagano:

1 / NAGANO IS ONE OF JAPAN’S MOST LIVEABLE PREFECTURES

Regularly cited in the top three, if not the at the top of the list of prefectures Japanese want to relocate to, Nagano is widely recognised as one of the country’s most liveable, healthy places to setup. The prefectures expansive open landscapes and low population density allow for a healthy lifestyle and slower pace of life – two contributing factors to Nagano boasting Japan’s longest life expectancy. A lower cost of living, good schools and cheaper property all add to the appeal that attracts people to move and invest in Nagano.

The majority of the region remains forested with twenty-nine of Japan’s ‘100 Famous Mountains’ found in Japan. Nagano also boasts four national parks and lots of places to not just escape but quickly forget the crowds of Japan’s urban centres.

2 / A SMALL POPULATION WITH PLENTY OF SPACE TO BREATHE

The official numbers show that Nagano is Japan’s fourth largest prefecture but ranks only sixteenth in population size and tenth in low population density. The cities of Nagano are small and pleasant, with Nagano City boasting the largest population at just under 370,000 people. Surrounded by mountains, farmlands and forests, the residents of Nagano are blessed with beautiful and abundant natural landscapes to explore, dotted with small towns and villages within easy reach of the cities.

3 / A SLOWER, HEALTHIER PACE OF LIFE

As a place of traditional and rural character, life in Nagano is a little more relaxed. Forget the crowded trains and long commutes of the major cities, life here ticks along at a less hectic pace with a healthier work-life balance.

As the proud host of the 1998 Winter Olympic Games, Nagano retains an international profile that attracts plenty of visitors and opportunities. The region’s world-class ski resorts attract visitors from all over the world each winter while many are now developing their reputation, facilities and services as all-year-round destinations. Put it this way, if any of your friends and family ski, snowboard, hike, mountaineer or just love the outdoors, they’ll be very jealous and you’ll have plenty of visitors – and as a stop on the Hokuriku Shinkansen line running from Tokyo to Kanazawa, Nagano is under 90-minutes from the capital and its airports.

Nagano is a place of four seasons. Most famous for the deep snow of winter, the region is blessed with an ideal climate that makes living here truly enjoyable.

Nagano’s higher altitude blesses it with a cooler climate than coastal areas and most of the large cities – typically around 3 to 5°C cooler than Tokyo. Winter typically runs from December until mid-March. Snow is possible at anytime for areas in northern Nagano with the heaviest snowfall typically occuring in January and February.

Like most regions of Japan, Nagano has a beautiful is beautiful with Nagano’s cherry blossoms blooming a little later, typically from the first week of April onward.

But it is perhaps its summer which is the big positive of the Nagano lifestyle that often goes unnoticed. While summer here is also hot, the higher altitude of the region spares it from the worst of the summer heat and humidity. For certain it will be humid for a little awhile, but a much shorter time – typically only 6 to 8 weeks in July and August – than the coastal regions making Nagano’s summer really enjoyable and comfortable.

Before long, the weather will cool and herald the beginning of Nagano’s long, beautiful autumn. Beginning as early as late-September, the region is home to some of Japan’s most stunning autumn colours which you can enjoy until mid to late-November. In short, while Nagano might be most famous for the snow of winter, it is the region’s four seasons and comfortable annual climate that often convinces people to relcoate here.

One of the first questions we considering a move is what job options are available… we are happy to say that in Nagano, there are plenty! Nagano enjoys the second highest rate of employment of any prefecture in Japan, including the second highest rate of employment for women. Tourism and agriculture are two of Nagano’s major industries and as such, jobs are wide and varied. Both industries require a large number of people with varied skill sets. For tourism, foreign-language ability is a big advantage while there are plenty of positions suitable for persons with limited Japanese (especially if you’re looking to improve it!). Agriculture also opens-up varied roles, many of which can be filled by people with limited Japanese. Of course, there are English-teaching jobs too but one a big advantage of life here is that international residents have pathways into different careers and are not limited to teaching. For current listings, see our ‘The Nagano Lifestyle: Jobs & Employment in Nagano’ page.

Looking to carve-out your own path? Nagano’s smaller population and cheap cost of living means it is well-suited to people looking to establish their own business. The smaller population means there is less competition while operating costs are significantly lower than in Tokyo and other major cities. Under 90-minutes from Tokyo, Nagano just might be ideally-suited to realising your goal of setting-up your own business in Japan.

Whether you are looking to setup a business, buy a residence or investment property, you’ll pay significantly less in Nagano than more urban regions of Japan. The challenge of Japan’s ageing and declining population is most pronounced in regions such as Nagano, meaning that property prices can be very low allowing people to buy into the property market without overburdening themselves. Like most areas of Japan, Nagano maintains an ‘akiya bank’ (vacant/abandoned property database) with properties varying widely in location, condition and price. When buying through akiya banks, it’s important to do your research and go in with your eyes open in terms of the condition of the property, repair costs, taxes and other factors. However, with many towns and villages offering subsidies for renovation and further incentives to attracts new residents, there are some great opportunities in Nagano!

Nagano’s climate is ideal for growing some of Japan’s best fruit and vegetables, rice and all manner of tasty produce. Boasting the highest numbers of farmers of any prefecture in Japan, it comes as no surprise that the residents of Nagano consume more vegetables in their diet than any other region.

Most famous for its apples and grapes, the region is one of Japan’s true food bowls with residents paying much cheaper prices than people residing in Tokyo. Dotted throughout Nagano, farmers markets are the best place to buy with high-quality fruit and vegetables available all year round and a big reason the people of Nagano enjoy such healthy, long lives.

Finally (but perhaps this should have been first!), Nagano is the ideal region to get active and stay healthy by making the most of its expansive natural landscapes. In winter, the region’s numerous ski resorts offer some of Japan’s best skiing and snowboarding along with other winter pursuits such as snowshoe-walking.

Outside of winter, the mountains are just as big and blessed with some of Japan’s best hiking trails and mountaineering courses. Mountain-biking, trail-running, SUP (stand-paddling), kayaking, rafting and cycling are all increasingly popular with more and more major events popping-up each year. It’s a big part of life here and something you’ll fall in love with and pretty soon, won’t be able to live without. In the end, it’s no surprise that the residents of Nagano enjoy the longest life expectancy in Japan!

The first step on many peoples journey to living or buying property in Nagano, is that initial enticing stay in the region. Whether you live in Japan or wanting to visit from abroad, a ‘staycation’ or ‘workcation’ is a great way to start your love affair with Nagano. Our ‘The Nagano Lifestyle: ‘Staycation’ or ‘Workcation’ – The New Long-Stay Travel Trend’ page introduces options for a working visit to the region.

Real estate and properties vary greatly in price, condition and availability across Nagano’s many resorts depending on where you are looking – from high-end/luxury chalets and homes in resorts including the Hakuba Valley and Karuizawa to traditional ‘kominka’ (farmhouses) and old guestshouses and businesses in need of revitalisation, dotted through some of the less well-known resorts and areas. Our ‘The Nagano Lifestyle: Real Estate & Property in Japan’s Ski Resorts’ page provides an overview of some of the most popular, up-and-coming, and hidden gems when looking to buy in the region. 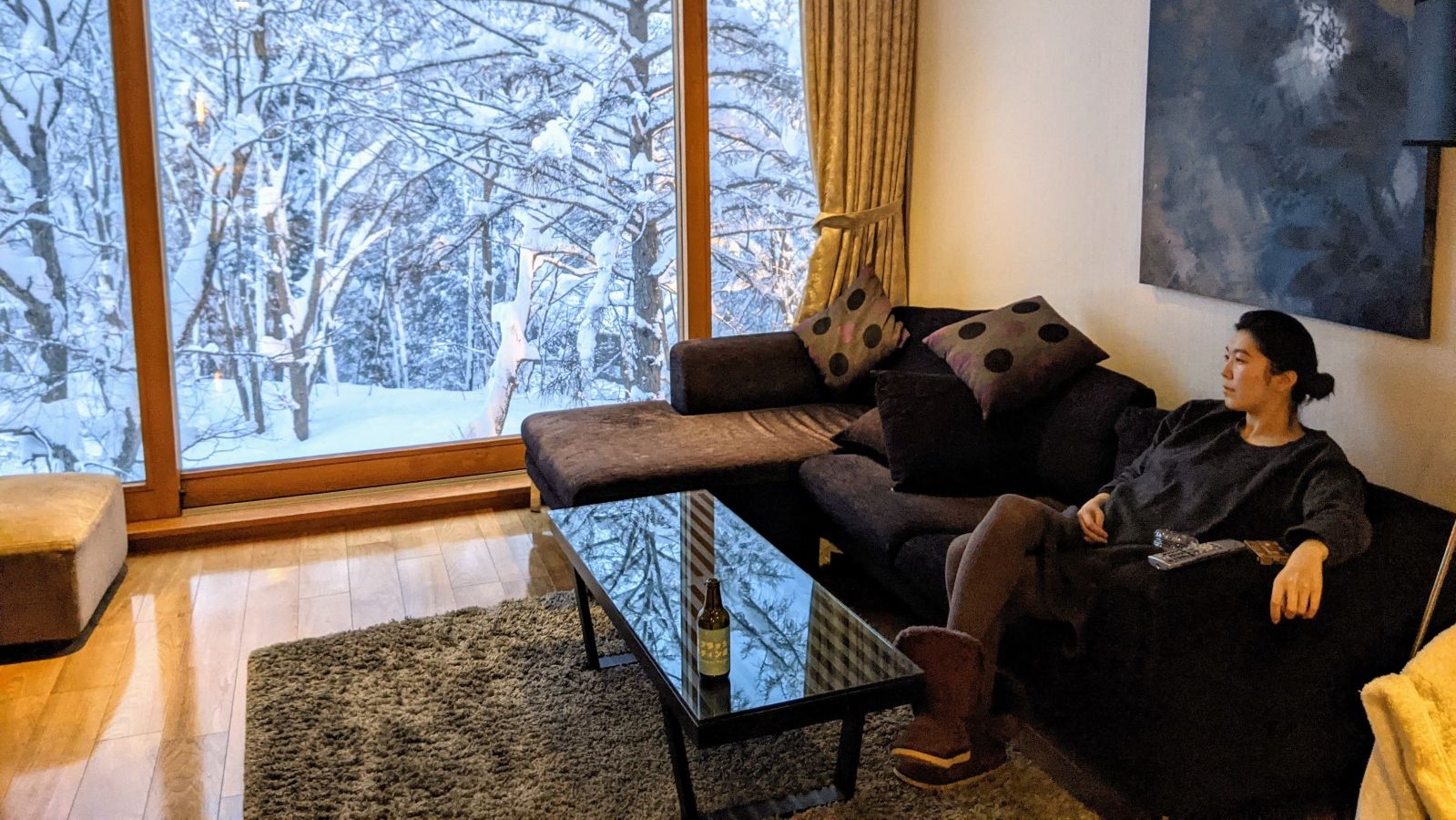