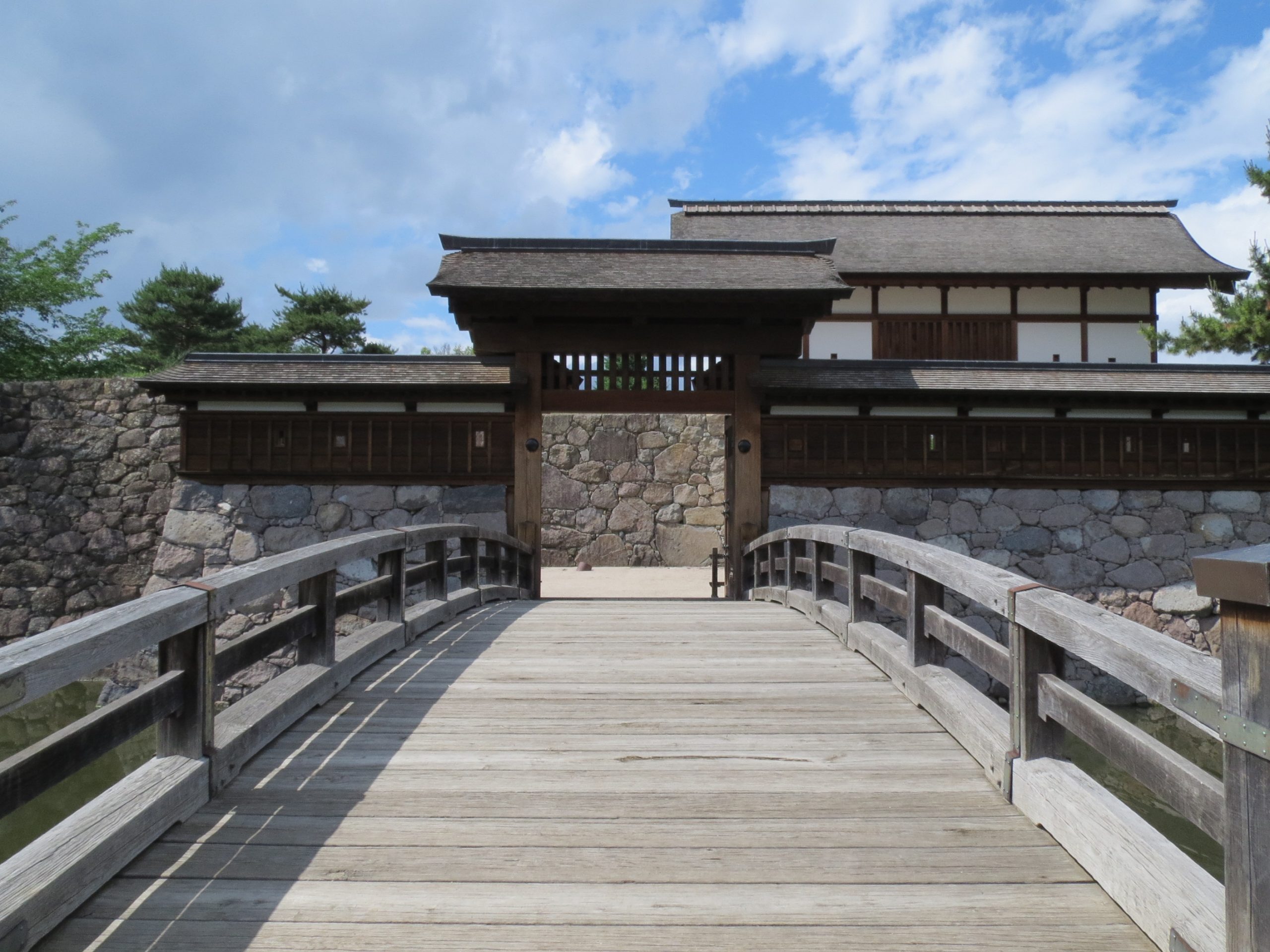 Visitors to Matsushiro will certainly notice the distinct six circled ‘Rokumonsen’, found throughout the town on markers stones, walls and tiles and important buildings. Emblem of the Sanada clan, the six circles are in fact coins, to be given to the boatman who grants passage across a river, that in traditional belief Japanese believe separates this world from the afterlife. 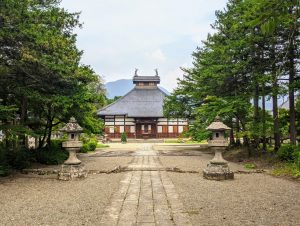 It represents the willingness of the samurai to give their life in battles and is a constant reminder of Matsushiro’s heritage. These are some of the highlights waiting to be discovered there:

Typical of most former castles in Japan, Matsushiro Castle Park is now a public park that sits on the foundations and previous site of ruling clan’s stronghold. 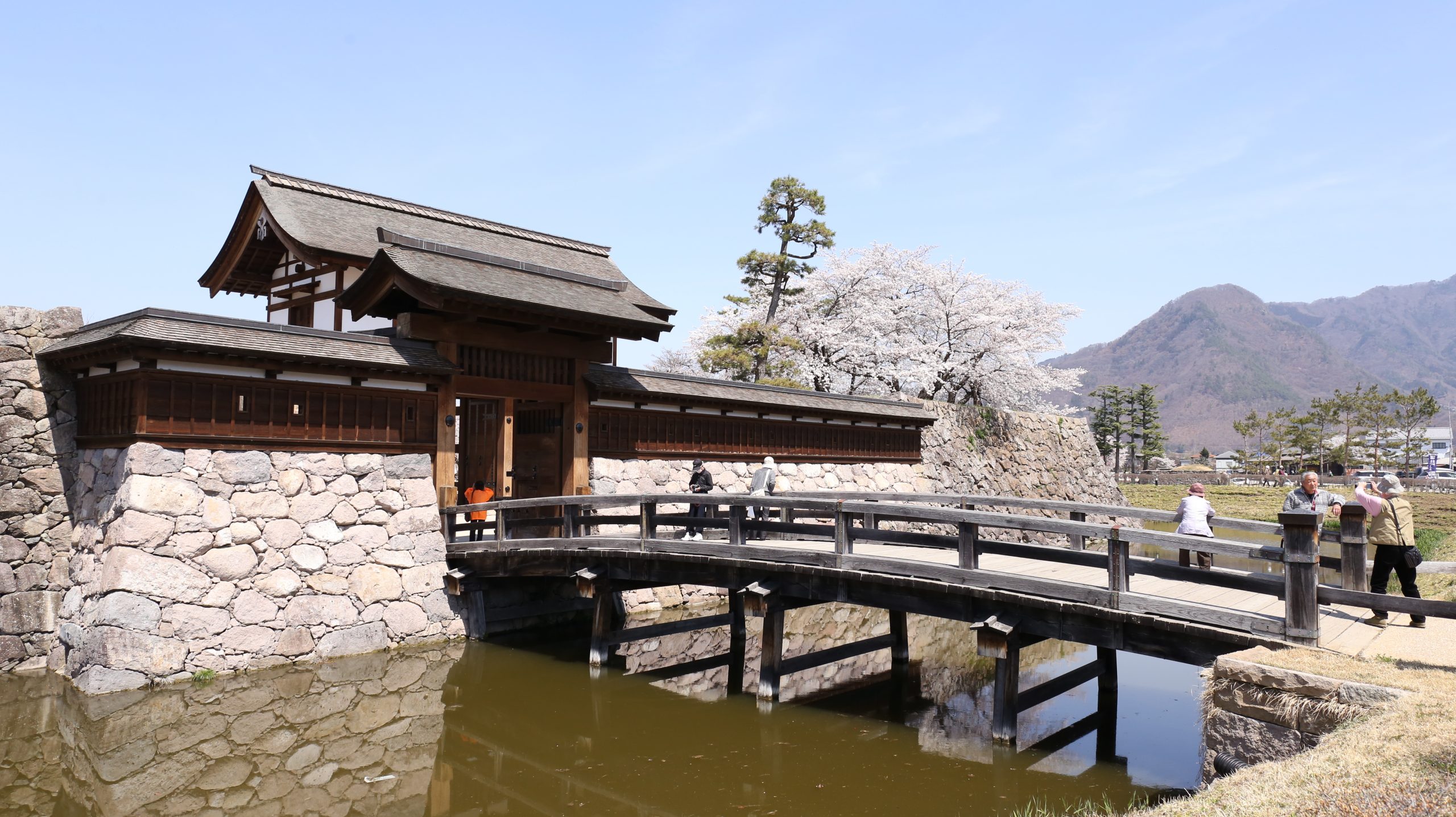 Forcibly dismantled under a government policy of abolition in 1871, the remaining buildings were destroyed by fire in 1873 leaving only the foundation walls and surrounding most as a reminder of what stood before. 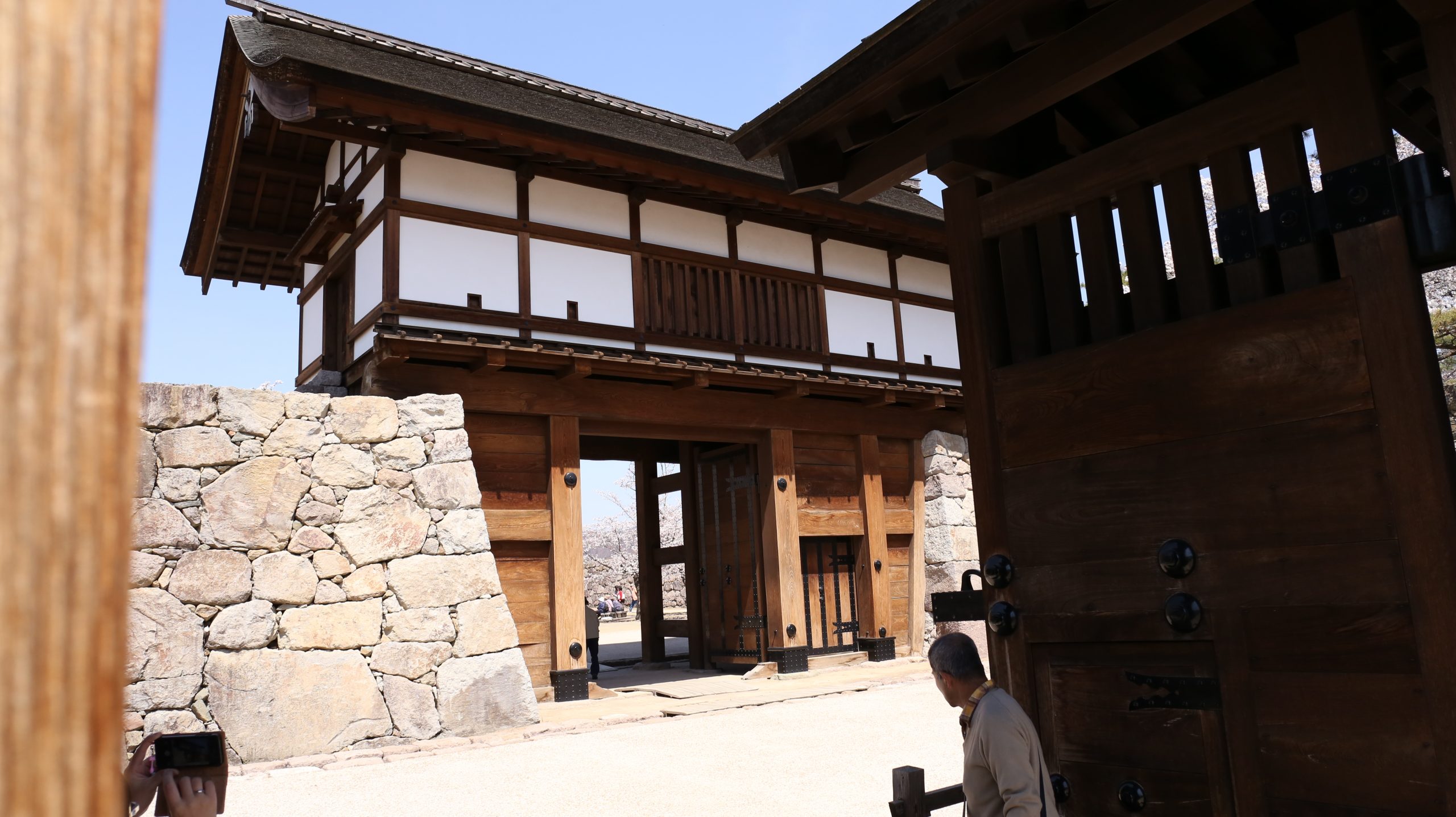 Several castle buildings were reconstructed in 2004 including the castle gate again sit atop the walls, while the interior of the castle grounds boasts numerous cherry blossom trees – a spectacular sight when in bloom each spring – best enjoyed during the Matsushiro Spring Cherry Blossom Festival or again in October, with the Matsushiro Autumn Sanada Clan Jumangoku Festival.

Built by Sanada Yukinori in 1864 – at a time the original castle was still standing – the Sanada Family Residence first served as home to his mother-in-law, before becoming his own retirement house in his later years. 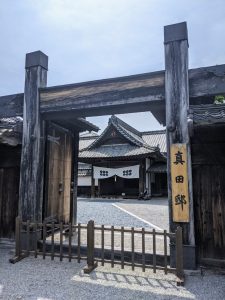 The Sanada Residence continued to be used by the Sanada family until it was donated to Nagano City in 1966. Declared a National Historic Site in 1981, the building consists of fifty-three rooms and extensive gardens. 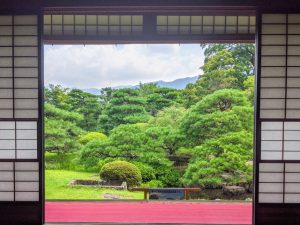 Recent restoration has returned it to its former glory with elaborate decoration and many original features visible in the private residence.

A short walk from the Sanada Residence, ‘Matsushiro Bunbu Gakko‘ or ‘Old School for Literary and Military Arts’, was also instituted by Sanada Yukinori. 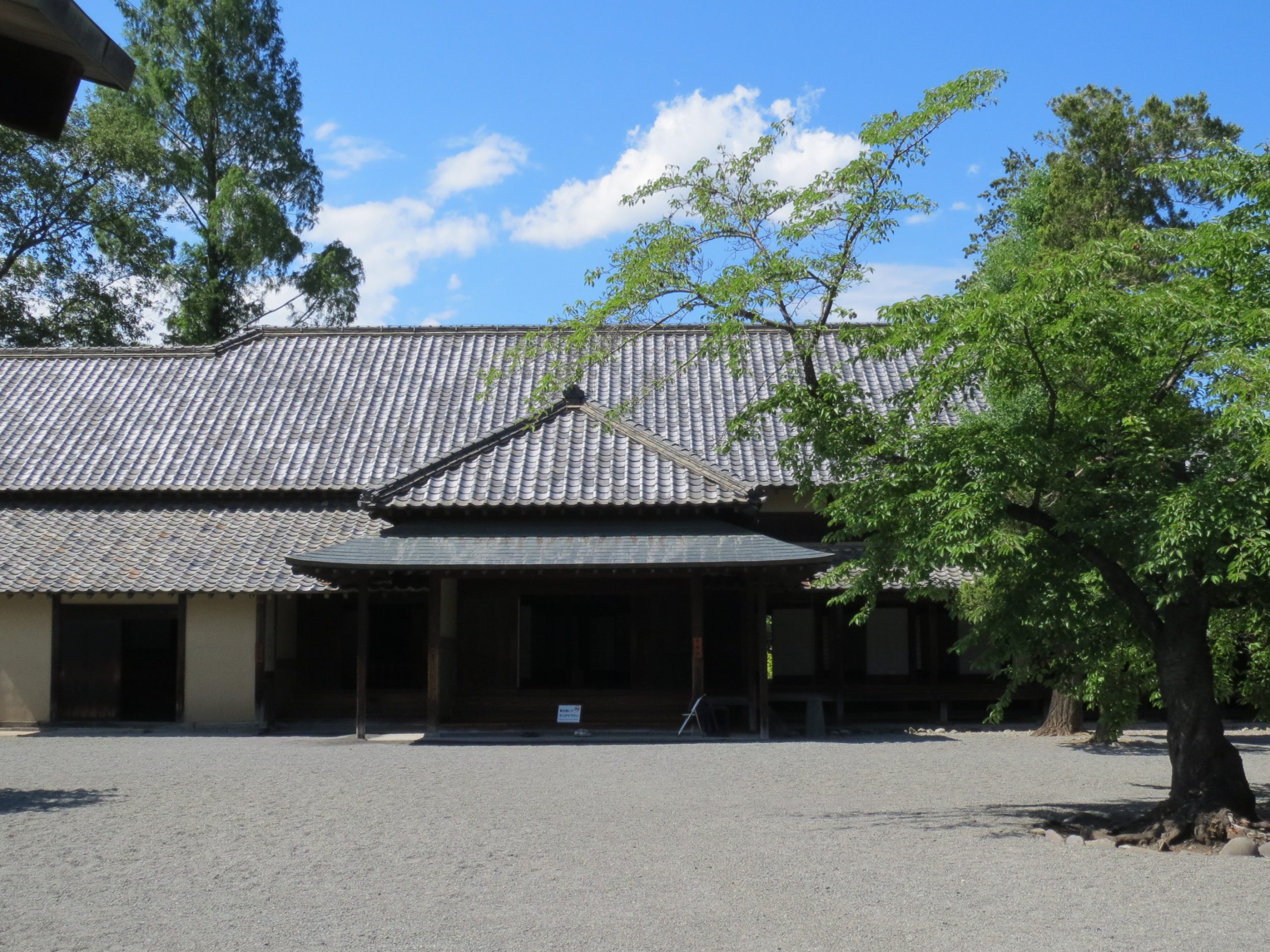 Opened in 1855, the school educated the sons of high-status samurai, including martial arts, traditional literature and arts, along with Western medicine and military science. 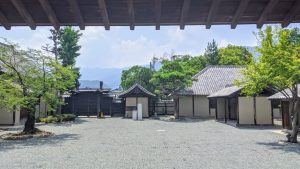 Nine buildings including the main school building and several ‘dojo’ for marital arts training make-up the school, which can be visited purely for sightseeing or to enjoy a range of samurai experiences.

Visitors to the Matsushiro Bunbu Gakko can try their hand at a range of skills and practices previously taught to attending students including archery and marital arts or more serene practices such as tea ceremony and flower arrangement. 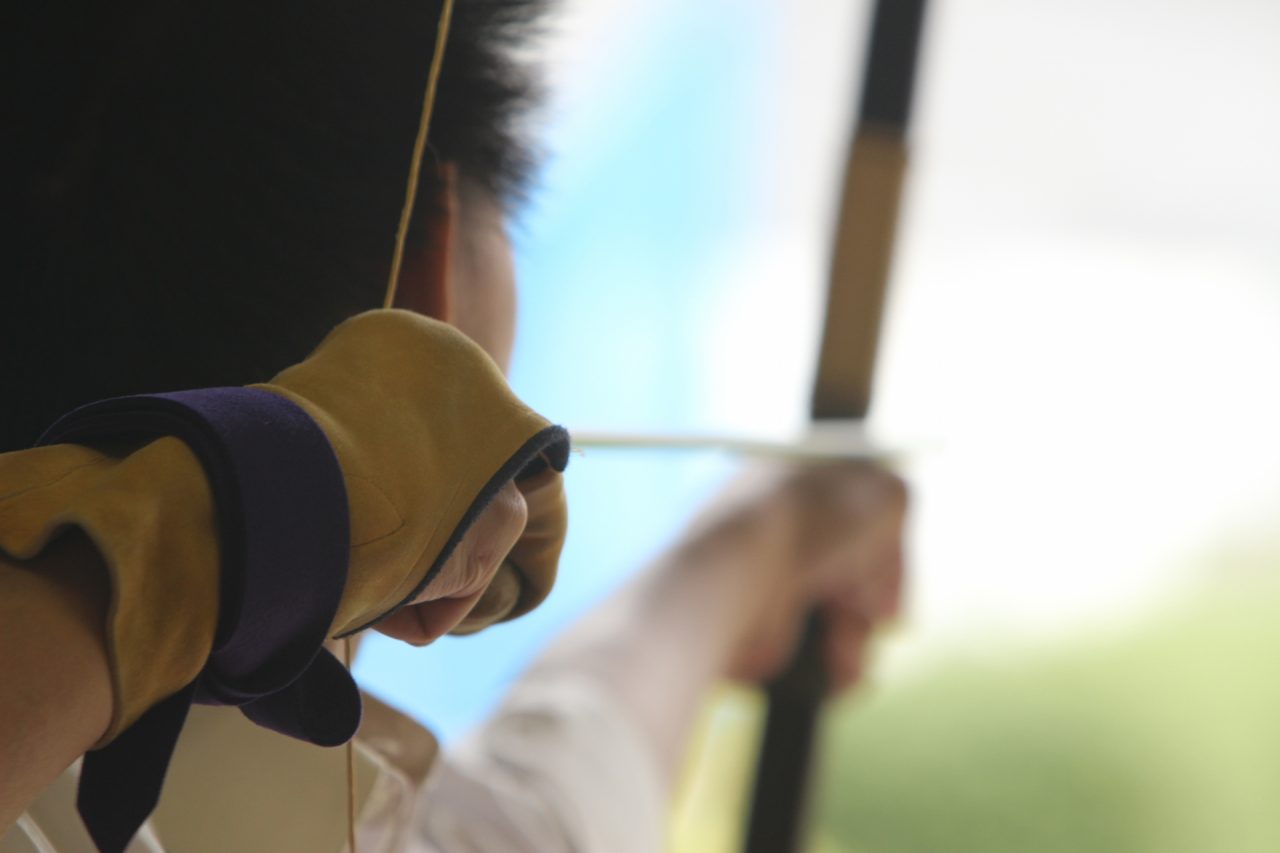 Available from Monday to Friday, bookings must be made in advance. For futher information, please refer to our ‘Samurai & Traditional Experiences’ page.

The Sanada Treasures Museum is a large building standing in front of the Sanada Residence and Matsuhiro Bunbu Gakko. The museum houses a large collection of artefacts once owned by the ruling-Sanada clan including ceramics, furniture, manuscripts weaponry and armour. 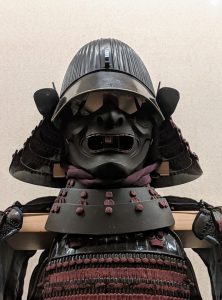 Vistiors will be drawn to two notable samurai suits of armour while fans of Japan’s unique ‘yokai’ (phantoms or ghosts) culture will enjoy looking over multiple manuscripts that are beautifully decorated with all manner of misbehaving ghouls and curious beings.

Dedicated to Zozan Sakuma (1811-1864), who played an important role in advocating for Japan to open-up to the world after a long period of isolation, Zozan Shrine commemorates an important historic figure. Zozan advocated for the opening of Japan’s ports to Western trade under they rallying cray ‘toyo no dotoku, seijyo no geijutsu’ (eastern ethics, western techniques). 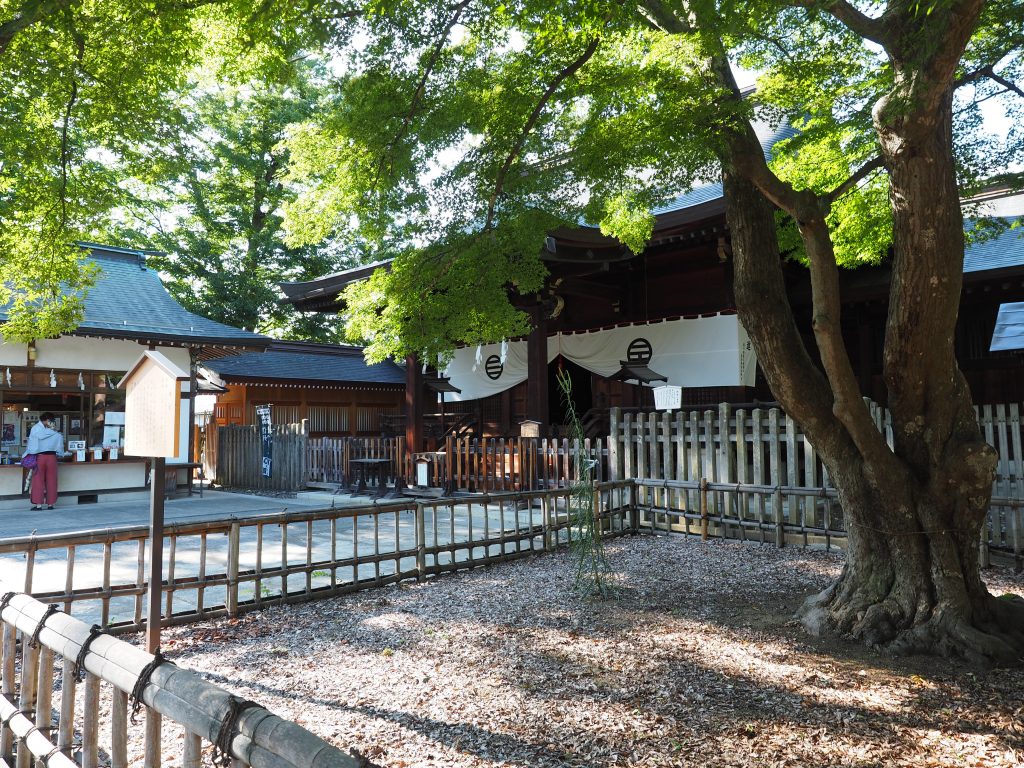 Known for his rare intelligence and education in numerous studies, Zozan was assassinated by a pro-imperial samurai in 1864 however before that event, he was instrumental in educating many people who would play important roles in ultimately opening Japan to the world and leading to its modernization.

Lying underneath Matsushiro, the Zozan Imperial Wartime Tunnels were constructed during the final nine months of World War II. In anticipation of an eventual allied invasion of the main islands, work began on what was to be an immense system of tunnels and subterranean bunkers that would serve as headquarters for the Japanese military and government. 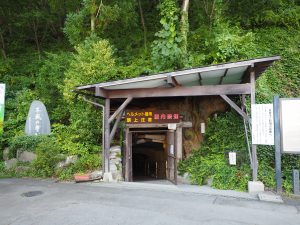 Today, a 500 metre section of the tunnels is open to the public. Estimated to have required a labour force of around 10,000 – mostly forced Korean labour – the tunnels hold a somber and poignant atmosphere, which must be treated with respect including acknowledgement that Korean comfort women were present during construction of the tunnels. 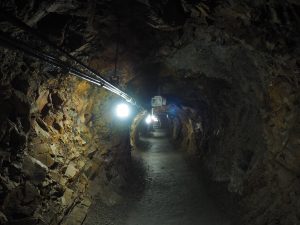 For further suggestions, our ’15 Things to Do in Matsushiro’ page provides additional suggestions and information including visiting Matsushiro using a private tour or charter. 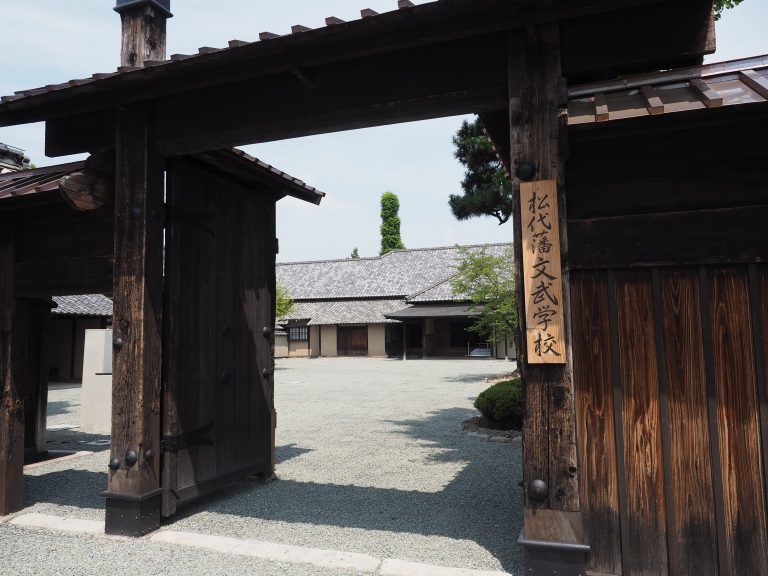